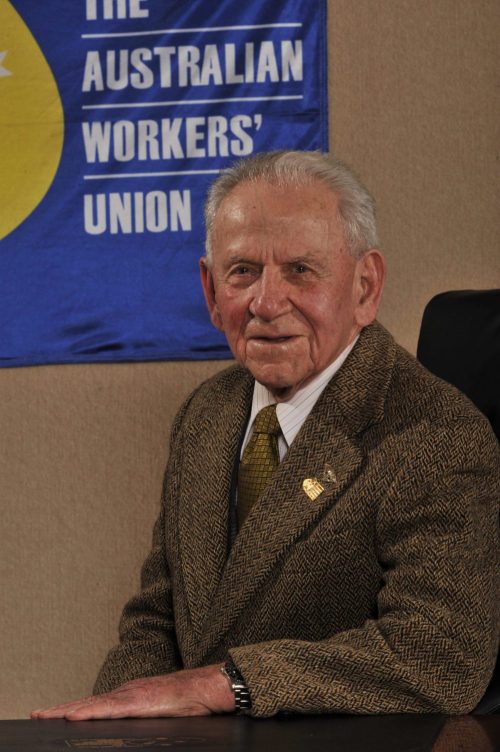 Members, it is with a degree of sadness that I inform you that Life Member Jim Doyle passed away on Saturday August 15th at the age of 102. Jim joined the AWU at the age of 15 initially working the shearing sheds in North Queensland. In his 87 years of continuous membership of the AWU there wasn’t much that Jim did not do including serving his country during World War 2 whilst maintaining his membership. Jim sat with the founding fathers of the AWU around the camp fires of the shearing sheds and listened to their stories of the struggle of the working class. Many of these Unionists were those who had returned from Prison on St. Helena Island after incarceration for their involvement of the Great Shearers Strike of the late 1800’s

Jim’s passion and commitment in organising Shearing Sheds from Queensland to New South Wales and South Australia were legendary. With minimal help from the Union Leadership at the time he was instrumental in achieving the 40 Hours week for Shearers when all around him said it could not be done. Jim’s natural leadership qualities became quickly noticed by Officials of the Union to the extent that they tried to minimise his influence on the Organisation by ensuring that his ability to become an Official was thwarted by relying on laws with respect to Union Officials and political views.

Jim’s opportunity to become a Union Official became a reality in the early 1970’s when he also became Vice President of the Branch and organised Shearers and the broader AWU Membership almost across the entire State from the Iron Triangle region of South Australia as far as Kangaroo Island. For Jim to traverse the State and clock up over 100,000kms per year in representing members was not uncommon. As he once said “I spent more time on the road than at home”, such was Jim’s commitment to the cause. In later years Jim’s expertise as an Editor came to the fore with his unique publication called “The Plod” which provided commentary from an editorial perspective of all the major local and international news concerning workers with helpful editorial insight as to how the situation could be rectified or which individual had given rise to the problem and how they should be dealt with. It was compulsive reading for many years with the publication only signing off once Jim had turned around 99 years of age.

In his latter years Jim could still address a large crowd. On Jim’s 100th Birthday and his final attendance to the 2018 Annual Members Dinner where he was awarded the unique honour of being the “Longest Continuous Union Member” (probably anywhere in the world) he demonstrated those honed skills in addressing a large gathering in his acceptance speech on achievements he was involved in during his time. To remember Jim in a few sentences of his life is fraught with danger for a man who shaped AWU history and direction both politically and industrially for over 85 years. His commitment to May Day (a very important day for Jim) was solid. There is always a significant moment that can be overlooked given the length of time Jim agitated on behalf of members. So many campaigns, so many struggles never deterred Jim and to recall just one with him was never easy however in conversations with many Branch Officials he was always pleased in how his Branch was operating and the struggles it had engaged in and the respective outcomes won. Jim was the embodiment of the Unions slogan “Stronger Together” and for his enemies as he once said “I have seen them all off”. For those who knew Jim and had the unique opportunity to be in his company, had the opportunity to share something special and for those who missed out sadly did just that, missed out.

Video Below – Recognition of Jim Doyle in SA Parliament