As all manufacturing workers know, the cost and reliability of energy are vital to the survival of our sector.

While gas prices crashed worldwide, Australians continued to pay a premium to use our own natural resources. This price gouging has sent manufacturers to the wall and allowed foreign multi-national gas companies to extract billions from us while we all suffer. It’s not good enough.

Throughout this crisis, the AWU called on governments to implement a sensible gas and energy policy which prioritises Aussie jobs and industry and urgently gets prices down.

The Morrison Government has finally listened. On Tuesday, they announced plans to create:

If implemented, this announcement is a lifeline for our heavy manufacturing sector, such as aluminium smelters, which have been at the mercy of rising energy costs.
Gas is a critical energy of the future that will provide cheaper and reliable power to our manufacturers. Gas plays a central role in a new economy, allowing renewables to come into the energy system and stabilising the grid with firming power.

It beggars belief that foreign customers were able to access Australian gas at a cheaper rate than domestic markets, while the rest of our massive gas reserves remain unused.

Australia still remains the only gas exporting nation that doesn’t keep a domestic gas supply, and we will continue to push for a national reservation policy.

To the AWU members and delegates who joined our call for action against outrageous gas prices, thank you.

This announcement shows that when we stand together and speak up as a sector and a movement, the government listens.

The task now is for us to hold the government to account on its plans, and ensure today’s announcement isn’t just all talk. There is too much at stake to give up now. 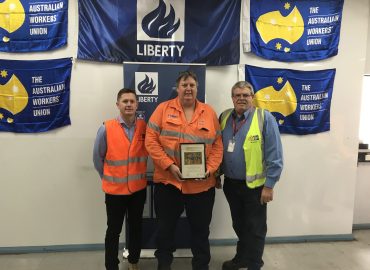